×
Get Pro Plus Membership

What’s the scariest part about being a catcher?

If you haven’t caught before you may not know exactly what can be the scariest part about the position.  It seems obvious that it would be getting hit by a swinging bat or getting run over on a tag play at home plate.  If you ask me though, neither of those are remotely close to as scary as having an uneasy feeling about which pitch the pitcher is throwing.

Every pitching staff seems to have at least one pitcher who crosses up the catcher on a consistent basis.  Sometimes it’s because he forgets to wear his contacts and doesn’t want to tell anyone, he can’t remember the signals with a runner on second base, or just plain “can’t see at night.”  As a catcher, it’s very unsettling when he is on the mound and you aren’t 100% sure which pitch he is going to throw.  When we’re expecting an off-speed pitch to be thrown and the pitcher throws a fastball it is scary and can do serious damage to a catcher!
If you’ve read my book, Catching-101: The Complete Guide for Baseball Catchers, you would know that there are a few things that I have recommended to catchers that can help the pitcher have an easier time seeing the signals.  Some of these are putting chalk on your fingers, using athletic tape between the knuckles, or even using white out on the catcher’s fingernails.  Until now, my favorite has been using white out.  The problem with white out is that it can be a real pain to try to get off of your hand and sometimes takes days to fully remove all of it!
There is a new product available called Game Signs (www.dontgetcrossedup.com) that now seems to be the best solution.  Game Signs are stickers that come in 3 different colors (white, safety yellow, safety orange) that are placed on the catcher’s fingernails.  From my experience with them they seem to work really well. 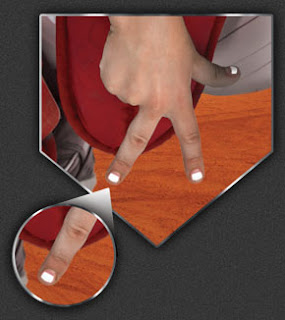 When I first heard about the product I thought it was a good idea, but I was curious how they would actually hold up in a game situation.  My biggest concern was if they would come off when a catcher is taking his batting gloves on/off.  From my experience, they seem to stick really well and they shouldn’t come off unintentionally.

Each sticker is in the shape of a fingernail and is about .5″ wide by .25″ tall.  They will probably be a perfect fit on youth players fingernails and take up about half of the fingernail on college/professional players.  My first thought was that I wished they were slightly larger and took up the entire fingernail, but after testing they’re actually a good size that is easily visible by the pitcher.

I’m a fan of Game Signs because I know how frustrating it can be to have a pitcher on the mound that crosses you up time and time again.  This is a great product that I’m going to require my catchers to use…there is no reason not to use them because they only costs about $.50/game!  Check out Game Signs at DontGetCrossedUp.com.

Both my sons are catchers. My oldest has used them in the past and I agree they are very visible in dark situations and stay on for the entire game. Excellent product!

Looking for something specific?

Take the first step towards sharpening your catching skills with this highly anticipated DVD.

Get Notified of New Articles

My Best Advice for Injured Athletes

How To Build An Affordable PlyoMed Pad

The Most Famous Frame Of All Time